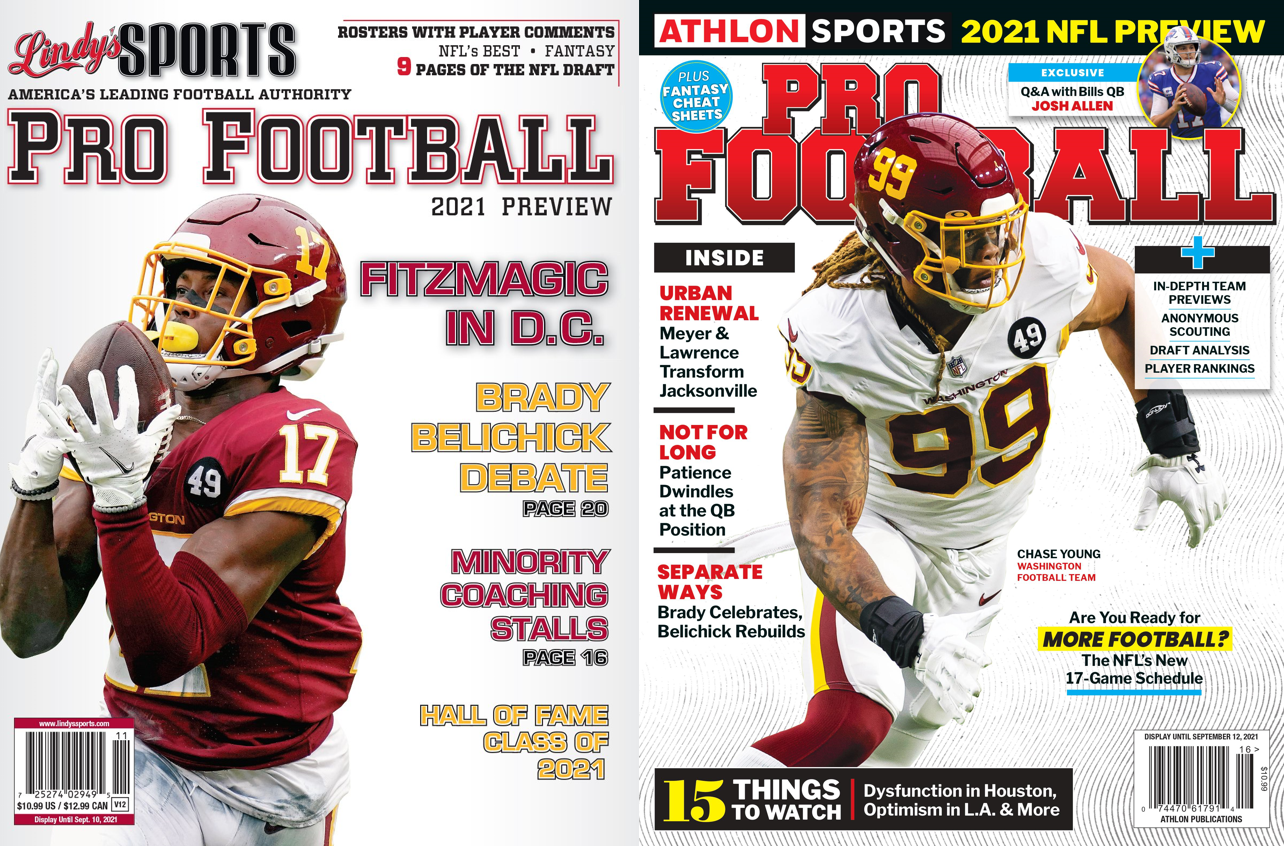 The Washington Football Team is on an upward trajectory, according to the nation’s top NFL preview periodicals.

For the Washington Football Team, 2020 was a year unlike any other in franchise history. The team tried to shake off an embarrassing 3-13 campaign in 2019 by hiring head coach Ron Rivera last January. A couple months later the coronavirus pandemic hit the United States. Over last summer, the organization retired its Redskins nickname and faced a slew of sexual harassment allegations while owner Daniel Snyder was embroiled in a legal battle with his ownership partners. Not long after, Rivera was diagnosed with squamous cell carcinoma, a form of skin cancer. All that and the team hadn’t even played a down of football yet.

A 2-7 start eventually led to a 7-9 campaign and a surprising division title in the lowly NFC East with Washington ultimately falling to the eventual Super Bowl champion Tampa Bay Buccaneers at FedEx Field in the Wild Card round.

Quarterback Alex Smith appeared in eight games in 2020, with Washington winning in his last five appearances. He brought home some hardware of his own, winning Comeback Player of the Year for his remarkable return following a devastating broken leg that almost cost him his life in 2018. He was released by Washington in March and retired in April.

Washington played four quarterbacks in 2020 and will go into the 2021 season with 38-year-old journeyman Ryan Fitzpatrick leading the charge after a failed attempt to acquire Matthew Stafford from the Detroit Lions.

Along with Fitzpatrick, the team retooled its offense this offseason by signing versatile wide receiver Curtis Samuel, who played for Rivera with the Carolina Panthers and with star wideout Terry McLaurin at Ohio State, slot receiver Adam Humphries, who played with Fitzpatrick while with the Buccaneers, former Chicago Bears tackle Charles Leno Jr., acquiring former Washington guard Ereck Flowers in a trade with the Dolphins and by drafting North Carolina receiver Dyami Brown and Texas tackle Samuel Cosmi. The team surprisingly cut stalwart right tackle Morgan Moses, who had started 96 straight games dating back to 2015.

Washington also made a number of moves to improve its top-five defense by selecting athletic Kentucky linebacker Jamin Davis with the 19th overall pick in the draft and signing former Cincinnati Bengals cornerback William Jackson III and safety Bobby McCain, who the Miami Dolphins cut in May. Defensive end Ryan Kerrigan, the franchise’s all-time sacks leader, was allowed to depart via free agency and signed with the Philadelphia Eagles.

Despite a daunting 17-game schedule featuring most of the league’s top quarterbacks on the horizon, the NFL’s top preseason periodicals are still optimistic about Washington’s continued attempt to be taken seriously around the league.

Continuing with my June tradition, I break down what these magazines say about the Washington Football Team. Enjoy. 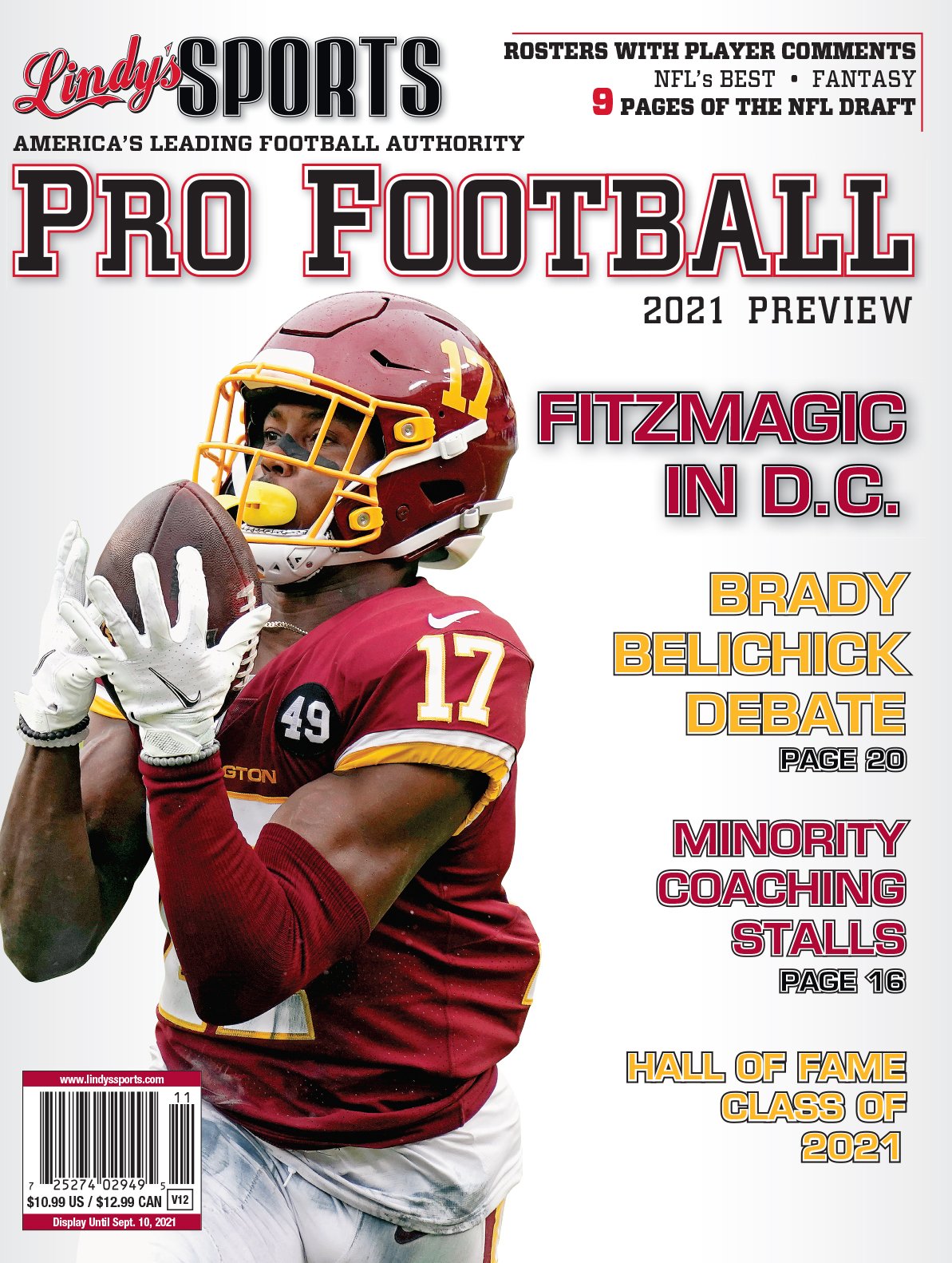 Prediction:  2nd NFC East – via Howard Balzer (2020 prediction: 4th NFC East)
Power Ranking: None
Analysis: “Perhaps Ryan Fitzpatrick can repeat the magic Alex Smith brought them in 2020.” – Howard Balzer
Notable Anecdotes: Safety Landon Collins, who has not lived up to his six-year, $84 million contract, is named the Washington player on the hot seat.

Washington’s draft was given a B grade.

Lindy’s ranked Washington’s defensive line as the best in the NFL and the fourth best overall unit in the NFL behind the Kansas City Chiefs passing game and the Tampa Bay Buccaneers linebackers and passing game. Washington is ranked as the ninth best defensive team in the NFL.

The “Scouting Snapshot” portion of Washington’s preview says that rookie John Bates “has a chance to be an instant impact player at tight end,” reinforces what some already believe by calling underrated defensive tackle Matt Ioannidis “the most productive player” on Washington’s defensive line and declared that Davis “has the speed, pop and wrap-up to be the next in line of the greats [defensive coordinator Jack] Del Rio has mentored.” 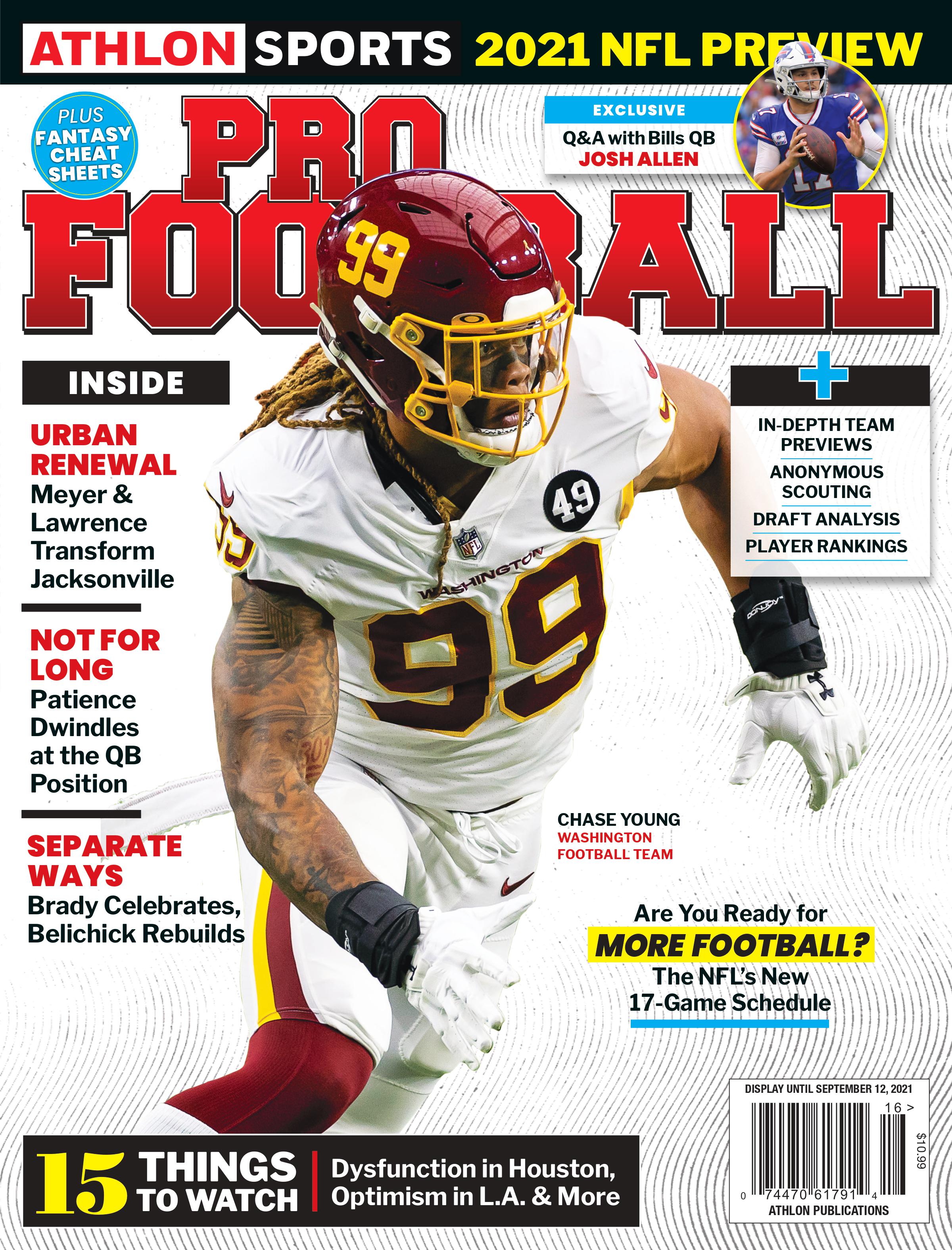 Prediction: 1st NFC East (2020 prediction: 4th NFC East)
Power Ranking: 6th NFC (2020 power ranking: 15th NFC)
Analysis: “Given the strength of the team’s defense and the state of the NFC East, it’s easy to see why there is such optimism in Washington. At the very least, it’s safe to say there is more talent, depth and versatility on this roster than there has been in a very long time.”
Notable Anecdotes: Athlon projects Washington to lose to the San Francisco 49ers in the Wild Card round. The magazine gave Washington’s 2021 draft a B+. Washington has no players represented in Athlon’s list of Top 50 players.

2020: Redskins will have rough 2020 season but potential is there, NFL preview magazines say

2019: Despite offseason moves, Redskins expected to finish 2019 in NFC East basement, according to NFL preview magazines

2018: Expectations low for 2018 Redskins, according to NFL preview magazines

2014: How the top NFL preview magazines view the Redskins