New quarterback Alex Smith hopes to point the Redskins to their first playoff appearance since the 2015 season. Photo by Brian Murphy.

The Washington Redskins faced an unprecedented situation when their twice-franchised quarterback Kirk Cousins was slated to hit the open market in March. Instead of ponying up to keep the three-time 4,000-yard passer in the stable, the team opted to give up rising cornerback Kendall Fuller and a third-round pick in April’s draft to the Kansas City Chiefs for quarterback Alex Smith.

Now the pressure is on Smith to keep the Redskins afloat. After missing the playoffs the last two seasons, Smith is charged with bringing the team back to relevancy. New running back Derrius Guice (a steal as the No. 59 pick in the draft) will certainly relieve some of the pressure Smith faces this season.

In one of their best drafts in decades, the Redskins continued to address defensive line in a big way, taking Alabama defensive tackle Daron Payne 13th overall along with Virginia Tech defensive tackle Tim Settle in the fifth round.

After losing four of their top five picks from the 2014 draft to free agency this spring, it’s unclear how quickly their replacements will step up. Based on how the rest of the division adjusted their rosters this offseason, it appears the Redskins haven’t done enough to compete for a playoff spot, at least according to the top NFL preview magazines. Take a look at how they view the Redskins going into the 2018 season.

Prediction:  4th NFC East – via Howard Balzer (2017 prediction: 4th NFC East)
Power Ranking: None
Analysis: “Alex Smith provides stability at quarterback, but the supporting case has issues, and the defense is average.” – Howard Balzer
Notable Anecdotes: Tight end Jordan Reed is named the Redskins player on the hot seat. Here’s a fragment of that sidebar: “The Redskins’ tight end is the heartbeat of head coach Jay Gruden’s offense but that doesn’t do anyone much good if he can’t stay on the field… Health isn’t in Reed’s control but if he doesn’t produce this season, the Redskins could decide to move on at tight end.” Lindy’s gave the Redskins draft a B- grade.

Prediction: 4th NFC East (2017 prediction: 3rd NFC East)
Power Ranking: 13th NFC (2017 power ranking: 12th NFC)
Analysis: “Can 2018 be different? Once again, they have given fans just enough reason to believe that it can. In Smith, the Redskins have a proven, playoff-tested quarterback. In Guice, they have arguably their most complete back since the days of Clinton Portis. And in Allen, Payne and others, they have perhaps their most talented group of young, front-seven defenders in years. But because it’s the Redskins, everyone will be waiting for things to go terribly wrong. As famous fan Dale Earnhardt Jr. told The Washington Post in April, “We just want to be relevant again.”
Notable Anecdotes: “Mr. Smith goes to Washington” is No. 5 in Athlon’s story “15 Things to Watch in 2018.” Ryan Kerrigan made Athlon’s ranking of Top 50 players, coming in at No. 41. Yet again Trent Williams was left off the list. Alex Smith was ranked as the league’s No. 10 quarterback. For comparison’s sake, Kirk Cousins is ranked 12th. No Redskins running back or wide receiver made the top 30 list for either position. Vernon Davis came in as No. 19 in their top 20 tight end/fullbacks list. Jordan Reed was not listed. Williams was again ranked as the fourth-best offensive tackle with Morgan Moses coming in at 20. Brandon Scherff was listed as the sixth-best guard in the league. While no Redskins defensive tackle was listed among the top 20 in the league, Matt Ioannidis and Stacy McGee ranked 16th and 20th, respectively among 3-4 defensive ends. Zach Brown is listed as the ninth-best inside linebacker. Kerrigan (No. 3) and Preston Smith (No. 8) ranked highly among the top 3-4 outside linebackers. After ranking fourth in their 2017 listing, Josh Norman drops to No. 16 this season. No Redskins safety cracked the Top 30 in that position’s listing. The Redskins 2018 draft was graded a B-.

Prediction: 4th NFC East (2017 prediction: 3rd NFC East)
Power Ranking: None
Analysis: “It will take a massive year from Alex Smith and an improved running game for the Redskins to navigate a tough schedule, but anything other than a second consecutive losing record would be a surprise.”
Notable Anecdote: The Redskins received an overall 2018 team grade of “C” and an “A” grade for their 2018 draft class, which was heavy on defense for the second straight year. 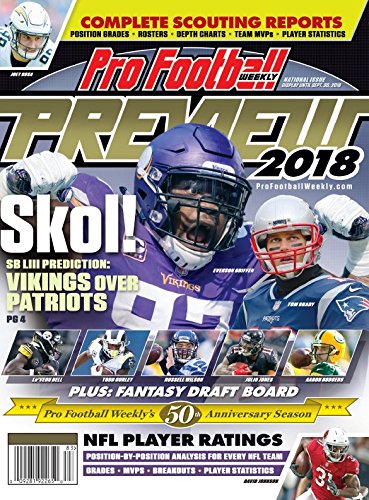 Prediction: 3rd NFC East, 7-9 (2017 prediction: 4th NFC East, 6-10)
Power Ranking: 25th overall, 15th NFC (2017 power ranking: 25th overall, 10th NFC)
Analysis: “Alex Smith could have fun toys with good health.”
Notable Anecdotes: The Arizona Cardinals are the only NFC team ranked below the Redskins in PFW’s power rankings. After being ranked 33rd in the magazine’s “Super 50” list of the league’s top players last year, Trent Williams dropped to 46th this year. He’s the Redskins’ only representative on that list. The magazine continues to use “Washington” in place of “Redskins.”  Just like with Athlon, Alex Smith was ranked as the 10th-best QB in the league and Cousins was ranked 12th. No Redskins running back or receiver made the cut for PFW’s position rankings. Jordan Reed came in at No. 11 on their top tight ends. Trent Williams checked in as the league’s third-best offensive tackle. PFW called Brandon Scherff the 10th-best guard in the league but incorrectly called him a left guard, saying “he has stepped in at guard next to Trent Williams to help form a nearly impenetrable left side.” Ryan Kerrigan was listed as the 14th-best pass edge rusher in the NFL. PFW ranked Zach Brown as the league’s 17th-best linebacker. Josh Norman came in at No. 17 in their list of the league’s best cornerbacks. PFW predicts Smith as the team’s offensive MVP in 2018 with Kerrigan reeling in the team’s defensive MVP honors. Like in 2017, running back is named the position battle to watch going into the season. Josh Doctson and Quinton Dunbar are listed as the team’s offensive and defensive breakout stars of 2018, respectively.