The Washington Football Team is on an upward trajectory, according to the nation’s top NFL preview periodicals.

For the Washington Football Team, 2020 was a year unlike any other in franchise history. The team tried to shake off an embarrassing 3-13 campaign in 2019 by hiring head coach Ron Rivera last January. A couple months later the coronavirus pandemic hit the United States. Over last summer, the organization retired its Redskins nickname and faced a slew of sexual harassment allegations while owner Daniel Snyder was embroiled in a legal battle with his ownership partners. Not long after, Rivera was diagnosed with squamous cell carcinoma, a form of skin cancer. All that and the team hadn’t even played a down of football yet.

A 2-7 start eventually led to a 7-9 campaign and a surprising division title in the lowly NFC East with Washington ultimately falling to the eventual Super Bowl champion Tampa Bay Buccaneers at FedEx Field in the Wild Card round.

END_OF_DOCUMENT_TOKEN_TO_BE_REPLACED 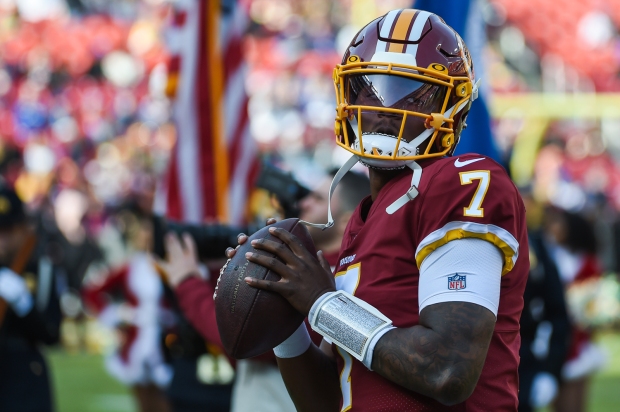 Redskins quarterback Dwayne Haskins is hoping to make a good impression with his new coaching staff as he enters his second season. Photo by Brian Murphy.

After a toxic 2019 season that saw a fan revolt unlike any in recent memory, the Washington Redskins underwent a culture change by firing team president Bruce Allen and hiring former Carolina Panthers head coach Ron Rivera.

Rivera brought over a lot of his Carolina staff to instill that culture. That also includes former players like linebacker Thomas Davis Sr. and quarterback Kyle Allen.

Second-year quarterback Dwayne Haskins showed progress at the end of what started out as a rough rookie campaign. This will be an important season to impress the new coaching staff and show off his true potential.

The Redskins rid themselves of several big names like star left tackle Trent Williams, who held out all of 2019 and was traded to the NFC champion San Francisco 49ers and old friend Kyle Shanahan. The team also traded cornerback Quinton Dunbar to the Seattle Seahawks and released cornerback Josh Norman and tight end Jordan Reed. Norman signed with the Buffalo Bills while Reed is still a free agent after missing the 2019 season following a concussion suffered in the preseason. Reed’s release and Vernon Davis’s retirement left the team’s tight end room bereft of talent.