After selecting Dwayne Haskins at No. 15 overall, the Redskins hope the rookie is the quarterback of the future. Photo by Brian Murphy.

Based on the moves they made this offseason, the Washington Redskins should, at worst, be expected to finish around 7-9 in 2019. A 9-7 finish while fighting for a playoff spot may be viewed as their best-case scenario. The team addressed several needs since free agency began in March but only time will tell if they can make their way out of the .500 quagmire they’ve been stuck in the last four seasons.

The two biggest factors will be health, which has been the team’s downfall the last two seasons, and quarterback play. With Alex Smith unlikely to play in 2019 (and maybe ever again) due to a broken leg suffered last season and Colt McCoy still recovering from a less severe broken leg suffered just weeks later, the Redskins addressed the most important position on the roster with a trade for veteran Case Keenum and the selection of Dwayne Haskins with the 15th pick in the draft.

Assuming star left tackle Trent Williams ends his holdout and returns at some point during training camp, the biggest questions heading into 2019 are: Who will start at quarterback and will the competition between Keenum and Haskins be decided legitimately? Four of the first five games are against playoff opponents, including the defending Super Bowl champion New England Patriots. Will Keenum be the starter so he can navigate the team through those early turbulent waters only to hand over the reigns to Haskins so he can sail calmer seas during his rookie voyage? Will Haskins be named the starter right away in order to put some more butts in the notoriously vacant FedEx Field seats? Or will Haskins be named the starter for Week 1 because he’s legitimately ready to play, early tests be damned?

Those questions will be answered in a couple months. But what fans can evaluate to this point is the team addressed pressing needs this offseason, such as safety (Landon Collins) and edge rusher (Montez Sweat). Even though they signed Ereck Flowers and drafted Wes Martin and Ross Pierschbacher, the left guard spot still appears unsettled. The team took a hit when inside linebacker Reuben Foster tore his ACL and LCL in May OTAs. The 2017 first-round pick was claimed by the Redskins last season amidst controversy and will miss the 2019 season. For the Redskins, that means another hole in the roster has opened up.

Despite an offseason that appears it will keep the Redskins afloat and at least semi-relevant in 2019, analysis from the top NFL preview magazines proves lots of doubt remains about this team. So much so, that Lindy’s, Athlon and Street & Smith’s all peg the Redskins for a last-place finish in the NFC East.

Keep reading to find out what else these reputable periodicals had to say about the 2019 iteration of the burgundy and gold.

Prediction:  4th NFC East – via Howard Balzer (2018 prediction: 4th NFC East)
Power Ranking: None
Analysis: “With their quarterbacks hobbling, the Redskins don’t have much choice but to play Dwayne Haskins. Their defense will have to carry them.” – Howard Balzer
Notable Anecdotes: Reuben Foster is named the Redskins player on the hot seat. The sidebar was obviously written before he tore his ACL and LCL in May OTAs.

Barry Wilner gave the Redskins draft an A, tied with the Minnesota Vikings for the highest grade assigned to any team.

The “Scouting Snapshot” portion of the Redskins analysis says cornerback Fabian Moreau will benefit from Collins’ arrival and that he is “a Pro-Bowl talented player who is ascending.”

Prediction: 4th NFC East (2018 prediction: 4th NFC East)
Power Ranking: 14th NFC (2018 power ranking: 13th NFC)
Analysis: “There is every reason, in other words, to expect another middling seven- to nine-win season, with the potential to be much better, or much worse, depending on how things break. And given the misery, strife and misfortune of the past couple of seasons, the odds, if nothing else, will be in Washington’s favor.”
Notable Anecdotes: Ryan Kerrigan is the only Redskin in Athlon’s list of Top 50 players, coming in at No. 40, one spot higher than last year. Keenum was ranked as the league’s No. 30 quarterback. Adrian Peterson was ranked as the league’s 19th-best running back. Again, no Redskins wide receiver made the top 30 list. No Redskin made the top 20 tight end/fullbacks list. Williams dropped from fourth-best offensive tackle to 12th while Morgan Moses fell from 20 to off the list entirely. Brandon Scherff moved up from the sixth-best guard in the NFL to fourth. Daron Payne was ranked 20th among defensive tackles. Jonathan Allen and Matt Ioannidis ranked 6th and 10th, respectively among 3-4 defensive ends. Kerrigan ranked fourth among the top 3-4 outside linebackers while no Redskins were named among the top 20 inside linebackers. Josh Norman (ranked No. 4 in 2017 and No. 16 in 2018) drops to all the way to 26th among cornerbacks this season. Collins was ranked seventh among the league’s top 30 safeties. 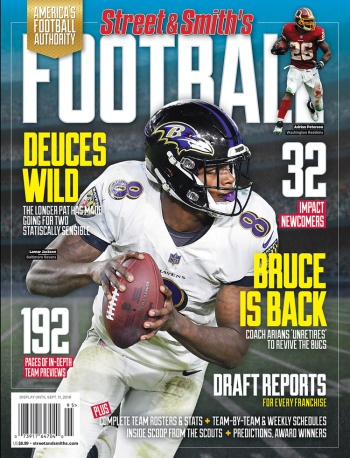 Unfortunately, Pro Football Weekly is not publishing a season preview magazine in 2019.