The Redskins opened up their sixth training camp at Richmond’s Bon Secours Training Center on Thursday with tempered crowds and quiet confidence.

A disappointing 2017 plagued by injuries led to a 7-9 record and marked the fourth time in five seasons the team missed the playoffs. The team rebounded with a solid performance in free agency and the draft. Now that camp has started, the time has come to show whether those moves will pay off or not.

Washington begins its preseason schedule against the New England Patriots on Thursday, August 9 at 7:30 p.m.

Enjoy my photos from the first two days of the Redskins’ 2018 training camp. END_OF_DOCUMENT_TOKEN_TO_BE_REPLACED 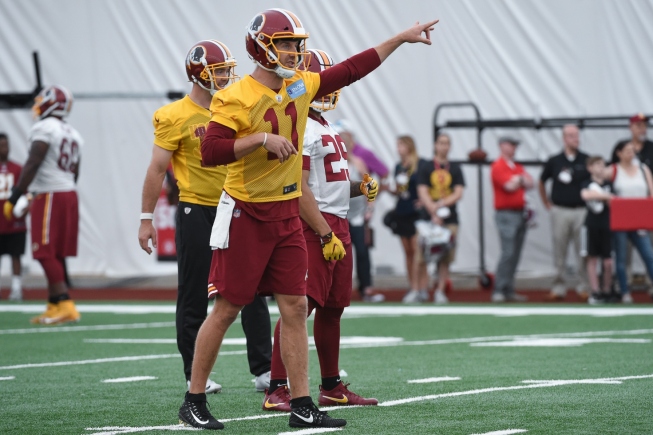 New quarterback Alex Smith hopes to point the Redskins to their first playoff appearance since the 2015 season. Photo by Brian Murphy.

The Washington Redskins faced an unprecedented situation when their twice-franchised quarterback Kirk Cousins was slated to hit the open market in March. Instead of ponying up to keep the three-time 4,000-yard passer in the stable, the team opted to give up rising cornerback Kendall Fuller and a third-round pick in April’s draft to the Kansas City Chiefs for quarterback Alex Smith.

Now the pressure is on Smith to keep the Redskins afloat. After missing the playoffs the last two seasons, Smith is charged with bringing the team back to relevancy. New running back Derrius Guice (a steal as the No. 59 pick in the draft) will certainly relieve some of the pressure Smith faces this season.

In one of their best drafts in decades, the Redskins continued to address defensive line in a big way, taking Alabama defensive tackle Daron Payne 13th overall along with Virginia Tech defensive tackle Tim Settle in the fifth round.

After losing four of their top five picks from the 2014 draft to free agency this spring, it’s unclear how quickly their replacements will step up. Based on how the rest of the division adjusted their rosters this offseason, it appears the Redskins haven’t done enough to compete for a playoff spot, at least according to the top NFL preview magazines. Take a look at how they view the Redskins going into the 2018 season. END_OF_DOCUMENT_TOKEN_TO_BE_REPLACED